The 5 Best Horchatas in Barcelona

Once upon a time… during the era of the Reconquest, a Valencian village woman gave King Jaume I “The Conquerer” a swig of a magical drink that was known as “llet de xufa” (tiger nut milk), to which he replied, “¡Això no és llet, això es OR, Xata!” a phrase which translates as “This isn’t milk, this is gold, darling!” True or false, this play-on-words was the supposed origin of horchata, the drink of kings.

The chufa, or tiger nut, is a tuber that was originally cultivated in the fields of Alboraya, Valencia. Imported during the Muslim era, when the Arabs established fields of crops in Valencian lands, today it continues to be a tradition that crosses borders.

We’re addicted to this drink that has a high energy value, intrigues many people, and is the best way to beat the suffocating heat. History, culture, and tradition surround this refreshing drink that originated in Valencia and is very popular in Catalonia. Here, we give you our five favorite horchata cafes in Barcelona, where you can enjoy some of the city’s best horchatas. And the best way to drink it? With some farton pastries, of course!

Marble tables, a spacious tile bar, and walls steeped in history and tradition. All this is Tio Che, a horchata cafe that has a homemade and traditional flair and dates back to 1912. It’s run by a horchata-making family whose members, since then, have dedicated themselves to satisfying neighbors and visitors alike in this small corner of Poblenou.

With more than 100 years behind them, Tio Che has become an icon of the city of Barcelona. A place with so much culture that it’s worth the trip to taste an authentic horchata and try their traditional fartons, which are the best accompaniment to this refreshing, carefully made drink. 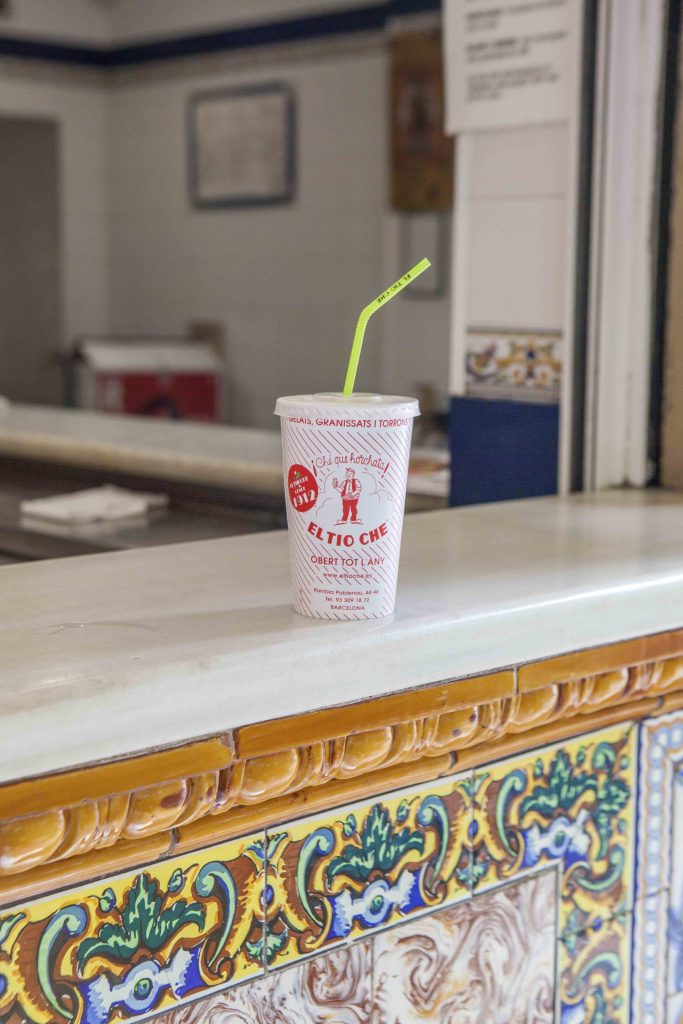 This small, family-run place located in the Eixample district is a living example of tradition and a whole family’s constant dedication to craftsmanship. After four generations, the family, originally from Xixona, in Valencia, has created a total of three parallel businesses bonded together with family ties. Together, they give off the feelings of belonging and unity that are traditional in large families.

We love La Valenciana. Walking through the threshold made us question, am I dreaming? To enter their store is to transport ourselves home. The cozy warmth of our house, being among our loves ones. And here, Ana and her brother are responsible for it all. They receive you with a smile, and it’s as if they already know us personally.

Personally, we think this is one of the best traditional horchatas in Barcelona, with its wide selection of pastries. This is La Valenciana. It doesn’t surprise us that after more than 100 years, they continue to be among the most beloved families in the city.

La Valenciana is your home and you’re the most cherished guest. Once you enter, you’ll never want to leave. Ah, and they have horchata shakes! 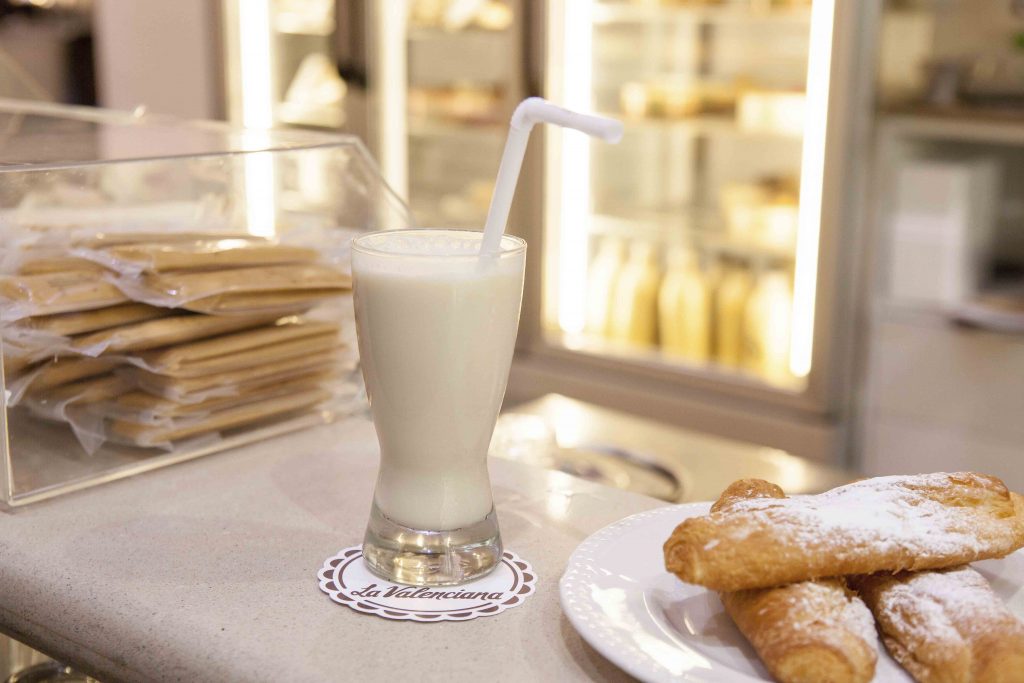 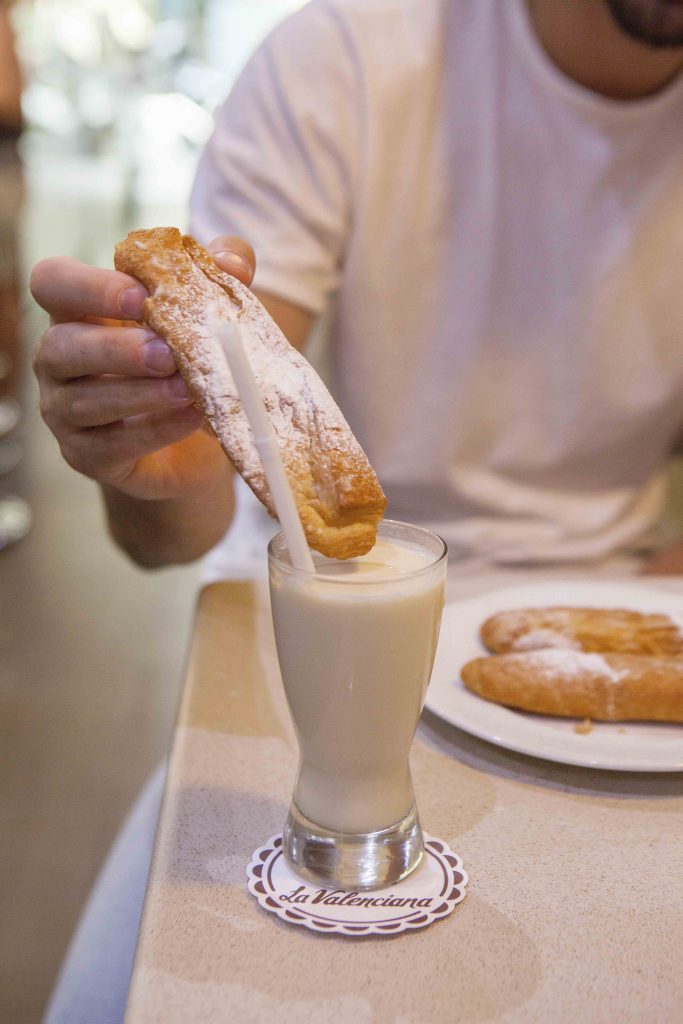 On the high street of Passeig de Sant Joan, adjacent to the Gràcia neighborhood, we find this small family-run horchata cafe. Verdú, a last name that’s well-known in the chufa world, is also the name of two locations in Barcelona, which have made many people addicted to this handmade and refreshing concoction that’s ideal for those warm summer afternoons.

It’s a small place with a few tables, where horchata is made daily. During the summer, we can enjoy their most prized treasure in carafes or to-go bottles. And, during the winter, they sell turron nougat candy. A chameleon-like establishment ideal to spend time having a drink.

Our favorite order is a liter of cool horchata to go and some fartons! Without a doubt, pure tradition. 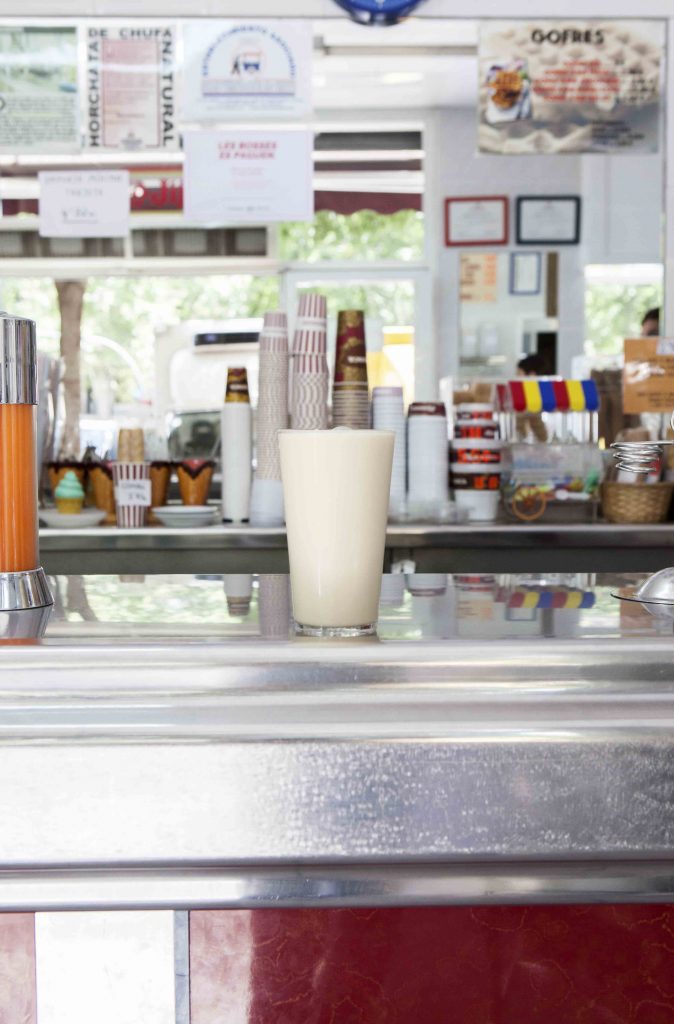 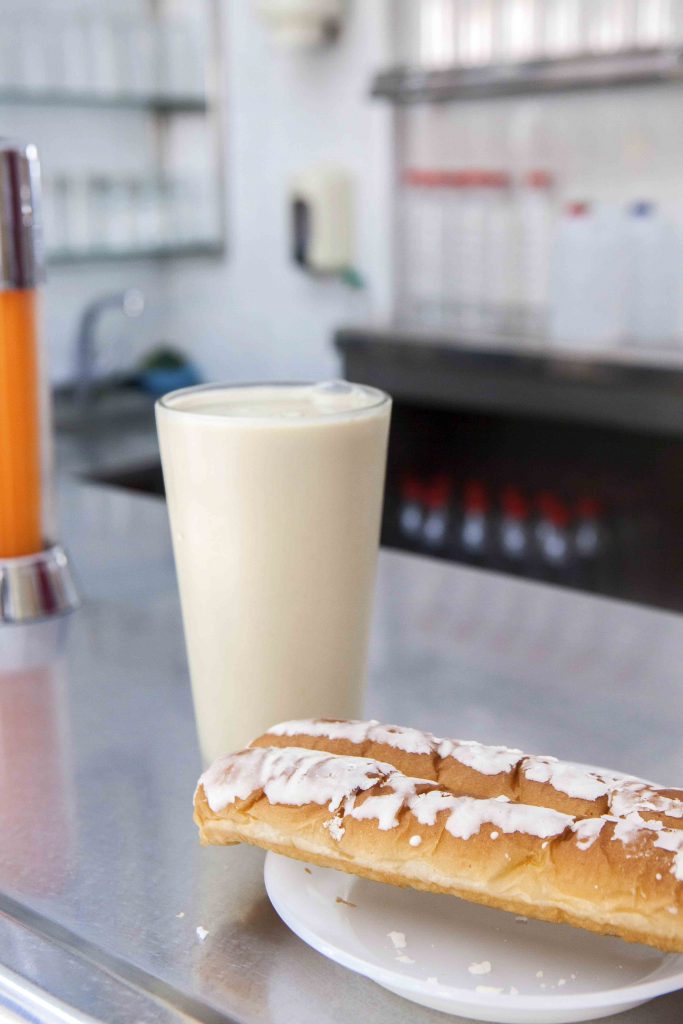 Situated on Carrer de Parlament, in the middle of a trendy neighborhood, we find this small temple of traditional and craftsmanship that’s stayed afloat year after year, since it’s practically a place of worship for many fans of good horchata. La Sirvent is a horchata cafe where, when you go, you’ll constantly see the hustle and bustle of people trying to enter and exit the small shop.

Open for almost 100 years in Barcelona, this small family business was founded there in 1920 when Tomás Sirvent, originally a confectioner from Xixona, decided to come to Barcelona. Together with his son, he created the store that today is the most famous horchata cafe in this neighborhood and one of the best in the whole city.

Our favorite summer activity is to walk down Parlament and end up at La Sirvent with a refreshingly cool horchata. Are you up for it? 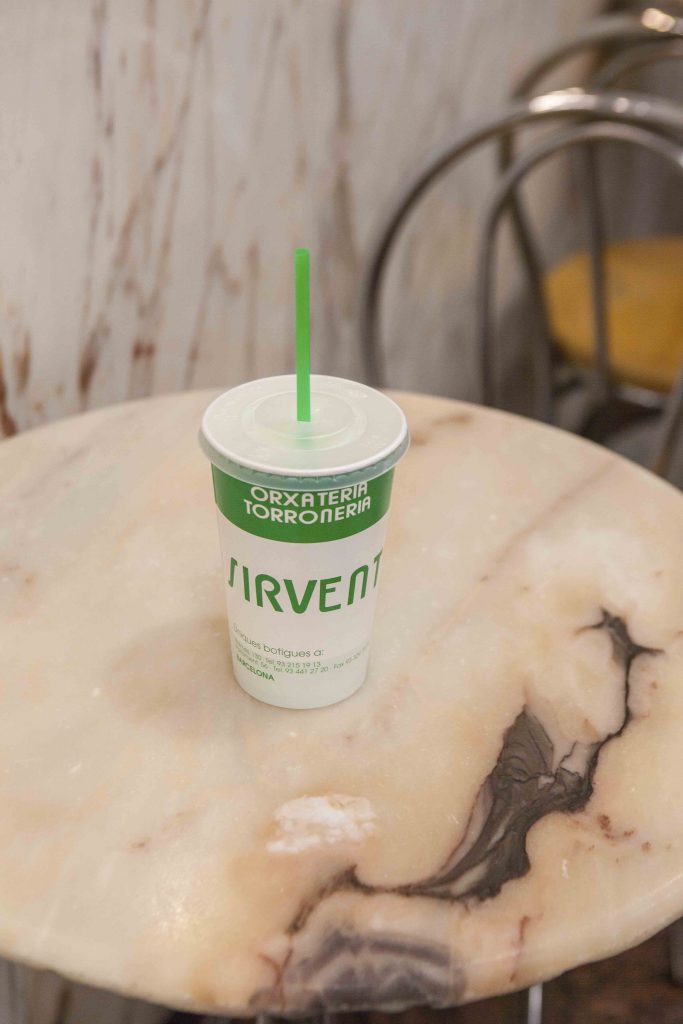 In the Gràcia neighborhood, there’s also a fondness for good horchata, but they’ll tell you that this small establishment, located in Torrent de l’Olla, is responsible for supplying the whole neighborhood with horchata. For more than 60 years, since 1956 to be exact, they’ve stayed open during the summer season (from April to October) with the goal of satisfying the most demanding palates.

Here you’ll find horchata, smoothies, and even ice cream. A sign that today is considered vintage, is a reclamation of history and tradition. A business that has devoted many years to continue pleasing neighbors and visitors alike who, day after day, pass by here wanting to try one of the best horchatas in Barcelona.

If you’re around Gràcia, don’t miss out on visiting this small horchata sanctuary. 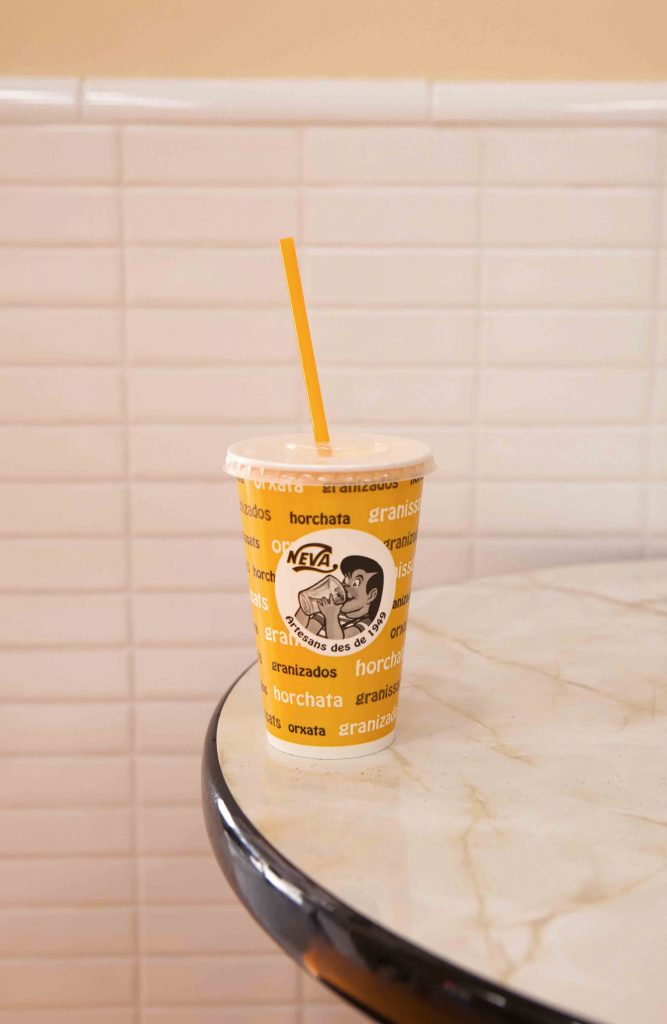 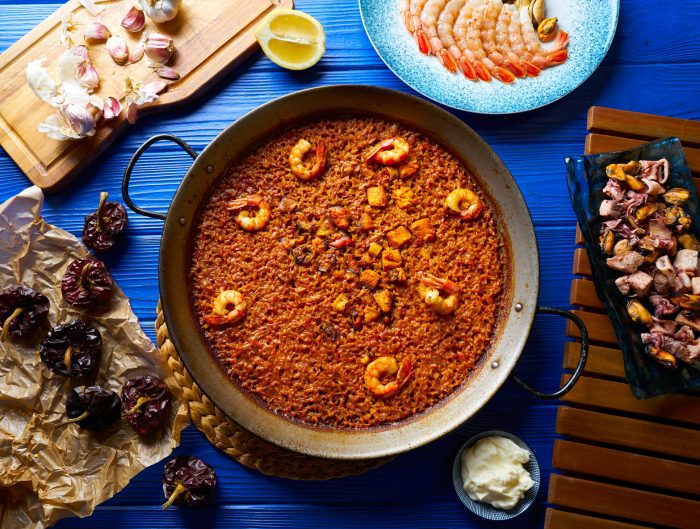 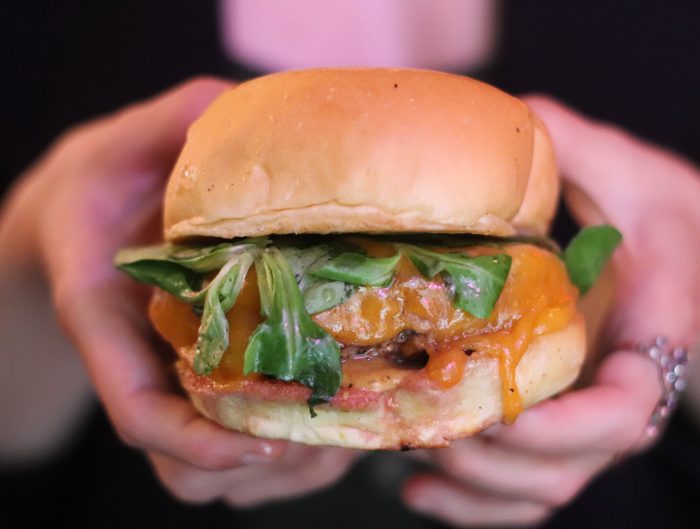 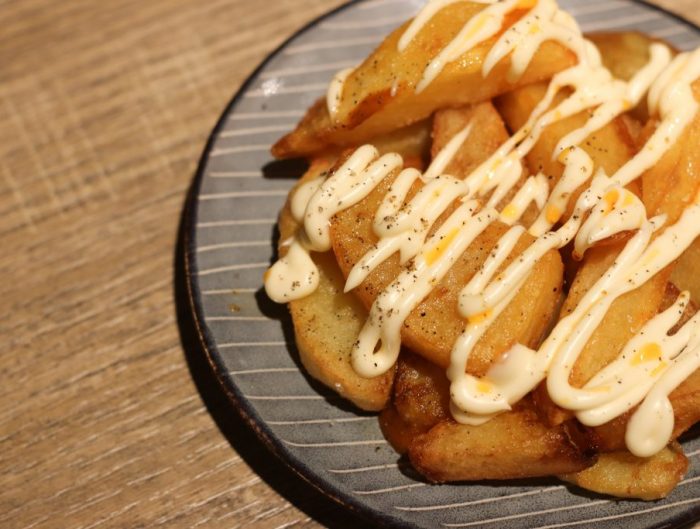 Quatre Coses, where Oriol Balaguer adds the salty to the sweet
June 25, 2019
PLATESELECTOR © 2020